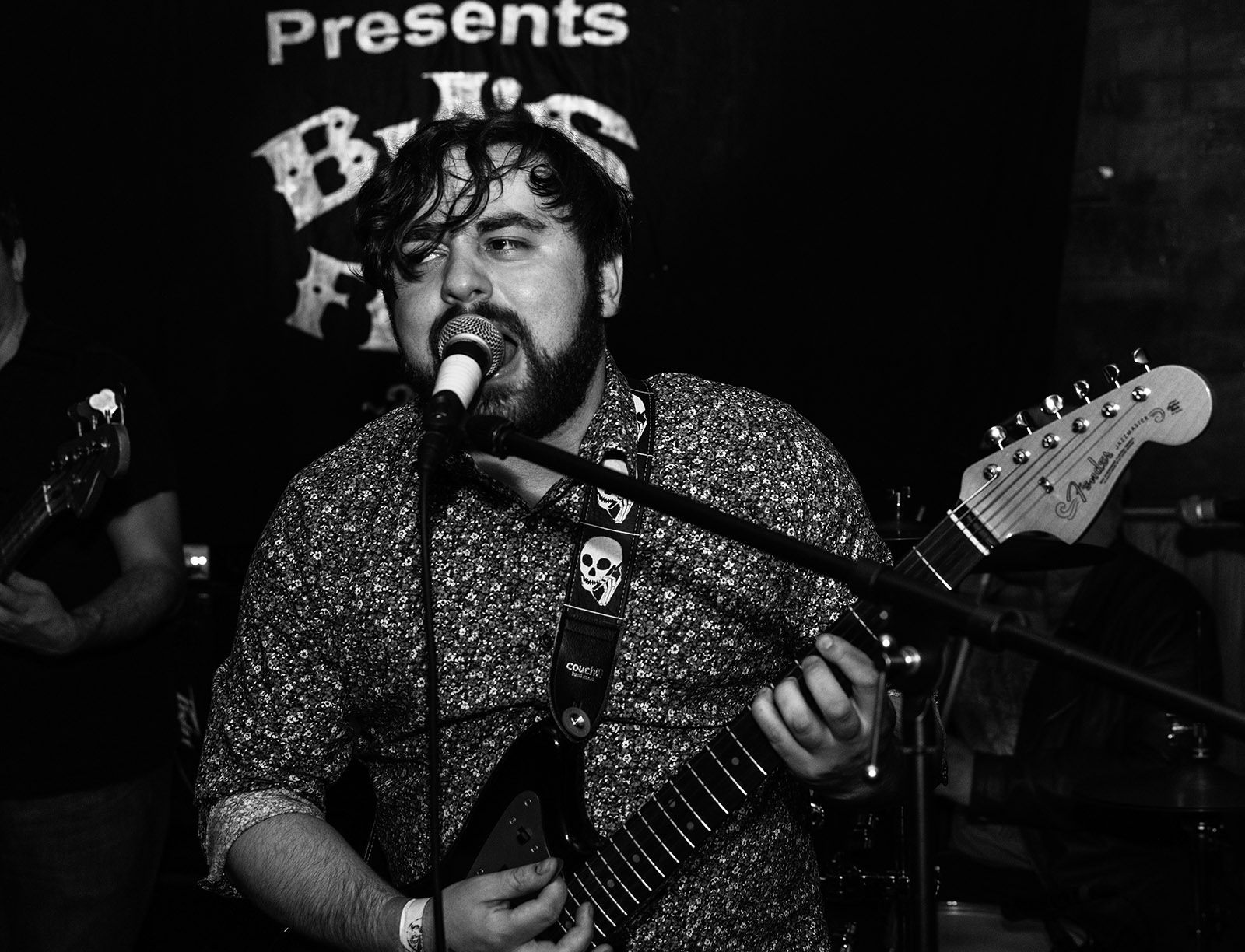 Spartan Profile is back with a member of our own family — Fallow Land’s guitarist/vocalist Whit Fineberg. In this exclusive interview, Whit discusses the origins of Fallow Land, the process of recording the band’s debut record Slow Down, Rockstar, and working with acclaimed producer Matt Bayles (Isis, Minus the Bear, Pearl Jam). Dig in and get a peek behind the curtain!


What should listeners know about Fallow Land — how did this project come to be?

Fallow Land began when I was living in Chicago and my mental health was at an all-time low. My first guitar teacher and close friend had just passed away, my ex-girlfriend (who I had moved to Chicago to be with) and I had just broken up, my band back home in Ann Arbor had broken up, and I was pursuing a degree in jazz guitar that kept me locked away in a practice room playing music I wasn’t particularly excited about. I began spending all of my free time recording a demos in my apartment on 410 S. Morgan St. (thus the name of the song from our first EP) and these became our first single and EP. Evan Veasey and I had gone to high school together, but were many years apart so our paths had never really crossed. Nonetheless, I knew he was a fantastic guitar player studying at the University of Michigan and we began discussing rebuilding my previous band, Bad Television, with him as the guitar player. As we began to play together more, it became clear that Evan was capable of playing significantly more complex music than what Bad Television was currently playing and more suited to the demos I had been working on lately. We joined together with two other local musicians got a few tunes performance ready and embarked on a two-week tour a month after we had formed.

What were you hoping to accomplish sonically with the record?

Sonically this record is driven by texture and rhythmic nuance. While Pinscher was very much guitar riff driven, The guitar work on Slow Down, Rockstar is often based around washy arpeggios drenched in reverb and chorus. The addition of Scott Kendall on bass and Evan Laybourn has also had a huge impact on the band sonically. Scott’s bass playing is a lot more sparse and subtle than what you’ve heard from Fallow Land in the past. While comfortable, gluing everything together harmonically and rhythmically Scott also searches empty musical pockets and fills them tastefully. Evan Laybourn drastically shaped this record in his ability to subtly imply complexity while never losing sight of the general groove and feel of each song. There are so many moments on this record that could start to feel monotonous if not for little flourishes Evan throws in to add new musical interest. I also became significantly more interested in vocal harmonies on this record. Something that was almost completely absent on Pinscher.

Were there central themes or ideas you are exploring on the record lyrically or musically?

A huge theme of this record is self-exploration. Pinscher was mostly about the end of a relationship. I really wanted to try to avoid writing as much about specific people on this record. Instead, I wanted to check in with myself after the events that occurred during the last record and the years that followed.

Tell us about the production process and working with Matt Bayles.

Working with Matt was incredible. He is someone who’s work we all admire. Oddly, we all dig different stuff that he’s done. Evan Laybourn and Scott are super into the Fall of Troy record he did. Evan Veasey and I really like the Foxing record. He’s just been a part of so many important records. He mixed Pinscher for us and we’d talked quite a bit during that process. When it came time to think about making a full-length I contacted him and was interested in working with us on pre-production, production, engineering, and mixing. He made plans to come up to Michigan to spend four days working through the songs with us prior to recording. I sent him all the demos and he came prepared to pick the songs apart. Most of the tunes he didn’t think were too far off, he mainly pointed our sections where we were being too heady and what we were trying to convey wasn’t coming across. There was one song in particular that he had us basically re-write. After making these changes we rigorously practiced for a month before driving to Seattle to record. We booked 12 days in of Stone Gossard’s (from Pearl Jam) recording studio and watched the songs start to evolve into what they are today. Matt was wonderful to work with. He pushed us hard and believed in our ability to produce. We all learned an incredible amount from working with him.

Were there specific musical influences you were trying to channel with this record?

After Pinscher, Evan Veasey and I had both begun listening to Dealer by Foxing a lot. That record definitely influenced us. Additionally, my interest in chorus was sparked by the wonderful records that Will Yip has been producing for Run For Cover Records like Hyperview by Title Fight. I’ve also recently really been getting into Peripheral Vision by Turnover (another Will Yip Produced Run For Cover) but I discovered that record after we finished making ours.

Talk about the process of synthesizing all of your own varied musical backgrounds and experiences.

We all come from a similar place musically. We all studied music in college and grew up listening to emo music and math rock. That being said we all kind of have our individual tastes within the band. Scott plays in a funk group, Evan Veasey plays in a jazz guitar trio, Evan Laybourn is really into Owen, and I’m really into shoegaze. Also, there is a big self-imposed age divide in the band. Scott is convinced he’s old enough to be Veasey and my dad and constantly makes comments like, “oh do you guys remember… oh never mind you’re too young.” We don’t really think it’s that big of a deal…

Tell me about the title of the record.

When we were recording with Matt, our drummer, Evan went out and bought a huge 12 pack of Dr. Pepper and was trying to shove it into the fridge at the recording studio. Matt walked out right as this was happening and said, “Woah, slow down rockstar!” This was kind of a funny comment about our choices as a band. We aren’t wild party animals, we are just four people who want to make music we are excited about. I think this record represents a dramatic shift for the band since Pinscher. Pinscher was all about being wild and living in the moment and partying. I’ve kind of taken a step back from that and am trying to live a healthier, more subdued life. This record kind of picks up where Pinscher left off and narrates that change in thought process. Also, with the addition of Evan and Scott, the dynamic of the band has really shifted to become something more mature and sustainable. It’s wonderful to be making music with three musicians who are serious and dedicated to their craft and not distracted by a bunch of nonsense.

Are there any specific songs or moments on the record that are especially meaningful or important to you?

For me the two most important songs are "The Things You Say" and "The Hope." "The Things You Say" is without a doubt the most emotionally challenging song I’ve ever attempted to write. A while ago I experienced an extreme breach of trust from someone who I considered to be a close friend. It really altered the course of my life. I tend to experience and cope with my emotions via songwriting. I knew I would inevitably eventually write about this experience, but every time I tried to write about it I hit a block. When I was finally ready to confront the experience, the song came together in a matter of hours. It was the fastest I’ve ever written and demoed a piece of music.

"The Hope" is the only optimistic song on this record. It’s about a wonderful person, who came into my life at a time when I was incredibly broken. Her love and support is constant and unrelenting.

We plan to regularly tour the midwest and parts of the east coast prior to the release of the record after which we hope to tour the US more broadly.

Talk a bit about Ann Arbor — has the city influenced the trajectory of the band in any way?

The Ann Arbor/Ypsilanti area (I group these two areas because many artists who develop in Ann Arbor end up in Ypsi because Ann Arbor is so expensive), is full of unbelievably talented artists and musicians. I am actually surrounded by musicians of a much higher caliber in Ann Arbor than I ever was in Chicago. This was a big factor in my decision to move back to Ann Arbor. Ultimately the biggest thing that needs to develop in order for Ann Arbor to become a destination for bands is the infrastructure and the involvement of the community. There are not a ton of venues in town. There is really only one viable option for medium-sized touring bands. I also think that as a community Ann Arbor needs to become more invested in the arts. There are a lot of college students in Ann Arbor who would rather go to frat parties than shows. I believe the way to combat this is to start having shows earlier so students can go to shows and then attend parties afterwards.

Any particularly relevant or irrelevant thoughts on the state of the nation / world right now?

Don’t claim experiences that are not your own. Our country is incredibly polarized right now partially because of the slew of misinformation that our current president is so good at disseminating. When you speak for a group that you are not part of, you not only take away that group’s opportunity to represent themselves, you are putting ignorance out into the world. There is no way you can possibly understand what you are talking about when arguing about experiences that you haven’t had. Let marginalized groups lead the conversation of oppression and rather than jumping in right away… just listen.

Anything else we should know about?

Evan Laybourn wears almost exclusively Star Wars shirts. Evan Veasey is really into chiropractic videos (which we all think is weird). If Scott wasn’t a musician he would be a stand-up comedian. I’m a huge soccer fan and incredibly excited about the signing of Christian Pulisic to Chelsea and the USWNT fourth World Cup victory!

Thanks for stopping by! Check out Fallow Land’s debut record Slow Down, Rockstar here and if you're a vinyl fan, don’t miss out on the “Pool Party” variant; there are only a few copies left (get it here).