The opposing worlds of heavy and ambient music are often punctuated by wandering sonic journeys: Artists in both mediums build layers and twisting turns that require both patience and commitment from the listener. While the payout can be worth the investment, it's a breath of fresh air when someone delivers the same experiential dynamics in concise and accessible arrangements. Museum of Light exists in this intersection: Without the dilution or detours, the Seattle band reaches for what is necessary -- for what matters most.

Looking back at the intersecting history of Ted Alvarez (guitar, vocals) and Rob Smith's (drums, vocals) previous projects (Traindodge, Riddle of Steel, With Knives, Medicine Bows), Museum of Light was born out of a concerted effort to forget the past and create something new.  "We're proud of all of our previous bands," says Alvarez, "but we sort of stumbled into an experiment where we're imposing margins and limitations of heavy music to such a degree that hopefully only the good parts are left." The band's debut record, Horizon, pulls between two poles: big, crushing, overwhelmingly heavy riffs and dreamy, Zen-like washes of ambience and found sound.  "Those would seem to be incompatible," says Alvarez, "but the more we played, the more we realized those two things could mesh, and could be incredibly appealing to us. It doesn’t hurt that there’s a bit of shared sensibility between those poles: For us, both are coming from places of joy, pleasure, and serenity as opposed to anger or rage. Don’t get us wrong — there’s plenty of wonderful aggressive music that comes from those places. But there sure is a lot of it already. This stuff should be a release to listen to and certainly to play, and that’s ultimately a positive vibe."

Horizon is a lush, dense, and cinematic record, but without the self-seriousness and lack of restraint that underscores many other releases within the genre. "Lots of great heavy bands will take you on 10-20 minute epic journeys, with twists and turns informed by tales of elemental gods or similarly heady mythology. Our challenge was, 'can we do the same thing in a very short space with only a handful of parts while preserving some mystery and weirdness?" says Alvarez.  Smith adds, "We are massive fans of complexity and wonderfully dense and abstruse music, and I think there are some surprising ways in which that sneaks out. But we placed that immediacy at the forefront."

The demos for Horizon were recorded in a converted barn outside of Mt. Vernon, WA with Alvarez's brother/sound engineer and then-bassist Travis Duennes (History, Programmes, Motorsports). The sessions established a process and confirmed the sonic objectives moving forward. Once pre-production was completed, the band recorded Horizon at Sharkbite Studios and Anti-Sleep Studios in Oakland, CA with Scott Evans (Thrice, Heiress, Thou, Sleep). "We knew there simply wasn’t anyone out there who can capture heavy music the way he can, where surprising detail and delicacy always shines out of the grind," says Alvarez. "He’s also really adept with melody and all the soft-boy stuff we do that you might not expect out of a guy who records tuff stuff with hipster Vikings." "I think we made the decision to work with Scott pretty early on, and didn’t think twice about it," adds Smith.  "We’d been listening to a few records he’d made recently (Of Violence by Town Portal, and Grievances by Scott’s own band, Kowloon Walled City) and knew that combining that sound with our songs was a no-brainer."

In a time where there are truly no restrictions to music, both in content and approach, the addition by subtraction philosophy brings a different type of gravity to the listening experience. The challenge of exercising restraint and employing elements of simplicity makes every moment of Horizon meaningful -- there is not a wasted note nor an expendable moment. Now joined by Ezekiel Rudick (Young Elk, The Slow Sound) on bass, the members of Museum of Light have found longevity and increased artistic maturity through this process of continual refinement. That commitment has taken on even more resonance in these very uncertain times.  "Really, more than anything it’s not being able to stop if we tried," says Alvarez.  "This band is church, it’s sanctuary, it’s a safe place that makes us better at whatever else we want to do." 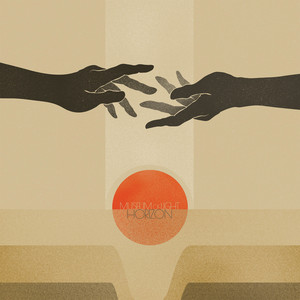