Ann Arbor’s Fallow Land was born in a time of trepidation — a period of unease and anxiety following multiple losses. It was during this time that guitarist/vocalist Whit Fineberg crossed paths with guitarist Evan Veasy and began a project fueled by catharsis and creativity. The result: Fallow Land's debut EP Pinscher, a guitar-driven narrative centered around disillusion. Two years have now passed since the release of Pinscher, and with time has come critical praise, healing, and evolution — all elements that fueled the creation of Fallow Land’s debut LP Slow Down, Rockstar.

For Fallow Land, Slow Down, Rockstar marks a sonic progression.  In the spirit of bands like Foxing, American Football, and Minus the Bear, the record is driven by rhythmically-nuanced textures. The sum of the intricate instrumentation and layers create a lush and mathy soundscape.  “The record is often based around washy arpeggios drenched in reverb and chorus,” says Fineberg. “The addition of Scott Kendall (bass/synth) and Evan Laybourn (drums/synth) has had a huge impact on the band sonically. Scott’s bass playing is a lot more sparse, subtle, and lyrical than what you’ve heard from Fallow Land in the past. Evan Laybourn’s drumming is nuanced and textural.  Together they provide the rhythmic and harmonic foundation of Fallow Land.”  While records within this genre can border on self-indulgent, Slow, Down Rockstar remains accessible, memorable, and melodically compelling throughout the entire album.

Thematically, Slow Down, Rockstar represents a dramatic shift for the band since Pinscher — mindful steps toward healthy and more mature lives. While in many ways the record’s narrative arc picks up where Pinscher left off, Slow Down, Rockstar runs through a much more self-reflective filter. "When I was younger I lived more recklessly,” says Fineberg. "It sometimes felt like every aspect of my life was an extension of the art I was creating. While this was beautiful to an extent, there came a point where it drove me to make a lot of impulsive decisions. I have frequently struggled to exist outside of my art and tend to derive a lot of my self-worth from it. This has ultimately lead to a lot of unhappiness and is an aspect of myself that I am trying to address.”

To bring Slow Down, Rockstar to life, Fallow Land partnered with acclaimed engineer Matt Bayles (Isis, Minus the Bear, Pearl Jam) to produce and mix the record.  “Matt was wonderful to work with. He pushed us hard and believed in our ability to produce,” says Fineberg. " After pre-production we booked 12 days in Stone Gossard’s recording studio and watched the songs start to evolve into what they are today. We all learned an incredible amount from working with him.”  When Fallow Land emerged from the studio, the record reflected the exploration the band committed to while tracking — a desire to push themselves into bolder and more experimental territory.  While Slow Down, Rockstar does resonate on a headier level sonically, it is entirely without pretension. The clarity of the lyrics and vocals, the deliberateness of the guitars and rhythm elements, and the tastefulness in the ethereal layers all serve as the perfect vehicle for album’s narrative arc.

Upon first glance at the track listing, listeners will immediately notice an element of storytelling with the track titles themselves.  With each title beginning with “The…” (e.g. “The Self,” “The Time,” “The Body”), a dialogue between the band and the listener begins before the first note of the record is played.

From the track listing, the songs “The Things You Say” and “The Hope” have emerged as standouts.

"'The Things You Say” is without a doubt the most emotionally challenging song I’ve ever attempted to write,” says Fineberg.”  "I tend to experience and cope with my emotions via songwriting. I knew I would inevitably eventually write about a certain experience with distrust, but every time I tried to write about it I hit a block. When I was finally ready to confront the experience, the song came together in a matter of hours. It was the fastest I’ve ever written and demo’d a piece of music.”  After twelve seconds of delicate, swelling instrumentation, the song and album open up with the lyrics “I don’t want to leave my house today / I’m afraid of the things that you say”  It is this sentiment of anxiety and solitude that drives much of the album’s tone.  This feeling carries into subsequent tracks as well, including “The Time,” a reflection on loneliness and idleness, “The Body,” a meditation on intimacy, and “The Eyes,” a farewell to a lost friend.

While an introspective bleakness does shape much of the lyrics, Slow Down, Rockstar offers a sense of optimism and clarity in its final track, "The Hope.”  “[The Hope] is about the first healthy relationship I’ve ever really experienced,” say Fineberg.” After years of being in relationships with unrealistic expectations and insecurities, my current relationship is the first time I’ve felt comfortable being 100% myself around someone else.”

The evolution of Fallow Land is one that allows for simultaneous cultivation and growth. It is a a sense of confidence and aspiration that propels the band forward as they march steadily toward the release of Slow Down, Rockstar.  After a successful year of playing with bands like The Sea and Cake, Emma Ruth Rundle, and Delta Sleep, Fallow Land plans to be touring broadly throughout the US in 2019, including an appearance at the final Bled Fest in Howell, MI. Stay tuned to spartanrecords.com for updates on Fallow Land and Slow Down, Rockstar. 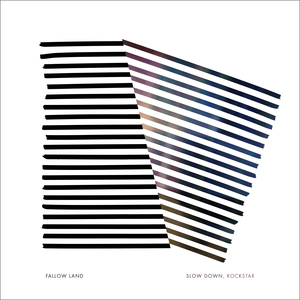