While the world slowly circles in a continuous holding pattern, some projects begin to take shape in their own time.  It is through this organic and unhurried process that authenticity and earnestness germinates and rediscovery begins.  These uncertain times also present opportunities for purging -- letting go of the past, picking up the pieces, and steering toward a more redemptive and cathartic pathway forward.

As the dust settled on an impressive list of former endeavors, it was an unlikely series of human connections that sparked the inception of Assertion. After years of self-described music industry PTSD and disenchantment, drummer William Goldsmith (Sunny Day Real Estate, The Fire Theft, Foo Fighters) was pulled out of musical isolation through a shared connection with guitarist/vocalist Justin Tamminga (Blind Guides, Dying Trades) -- fatherhood.

"Justin had reached out to me via social media to say thank you because he was inspired to play drums after listening to the song 'Seven' by Sunny Day Real Estate," says Goldsmith, "From there I discovered that he taught music to children which was inspiring in and of itself. I then found out that he developed a technique of teaching drums to children with autism. His son Lucien is autistic. This really caught my attention since my son also has autism."  Goldsmith would later discover that Tamminga and his two children played in a band together called Pig Snout and was completely taken back by the deliberateness and craftsmanship of the songs -- it would mark the first time in nearly a decade where he'd felt inspired to play music again.  "A little bit of time went by, and I found myself sinking back into that state of self-imposed exile from music," says Goldsmith. "But then Justin contacted me to see if I wanted to go see his other band Blind Guides play in Tacoma, WA.....which I uncharacteristically proceeded to attend. For many years I have had this idea in my mind of the ultimate bass player that I hoped to someday find. But after Blind Guides started playing, I started to go into a bit of shock realizing that the bass player I had been searching for was in Justin’s band."  It was this connection with bassist Bryan Gorder (Slorder, Blind Guides, The Speans) combined with his perspective shifting connection with Tamminga and Pig Snout that illuminated a pathway forward for Goldsmith.

Assertion is best described adjectively.  Real. Propulsive. Earnest. The band's debut record Intermission is complicated to categorize.  Equal parts raw and cinematic, it is a cathartic experience that, proudly, does not nestle nicely alongside current bands -- or really many releases at all from the last couple decades.  Intermission conjures more connections to the heady grit and soaring grind of the 90's.  Driving guitars anchored by a frenetic rhythm section.  A haunting vocal delivery concealing a heartfelt sentiment.  Track-by-track, the record builds into a dark and heavy crescendo but unpredictably retreats into delicate and fragile moments in masterful ways.

"For me," says Gorder, "it is about accentuating the absolute unique drumming that William brings to the table."  Tamminga adds, "[We] wanted to somehow capture William's drum set in all its fullness. I wanted to FEEL it on the record."  With the drums as the centerpiece, the band entered the studio with the intention of leaving with a record that sounded live -- as if you were in the same room with the band while they were playing punishingly loud.  To accomplish this, it made the most sense to keep all production responsibilities in house.  All individually accomplished engineers, the band moved into a studio space above Goldsmith's garage and the Intermission sessions began.  "We wanted other humans to feel this album," says Tamminga, "so we stayed away from using a click track for most of the songs. I like the ebb and flow of a natural rhythm. I’m not a robot and I don’t want to listen to or record copy and paste music. Music is art and expression. I love the human aspect in music. Even mistakes."

Lyrically, while there is not a verbally acknowledged throughline in the songwriting, there seems to be some thematic circling throughout the record -- primarily around the cathartic experience and the rooting out of past demons -- in this, a deep camaraderie amongst the band members feels deeply present within the project.  Similarly, the record's title, Intermission, is a direct reference to the current marquee of the Paramount Theater in Seattle, which boldly states "This is just an intermission.  We'll see you soon."  "That touched me and felt very thoughtful and forward-thinking," says Tamminga. "Music and art is an integral part of overall peace and contentment and something the world is lacking currently."

It is this acknowledgement of both past and present heartache that resonates deeply throughout Intermission and firmly plants the record as a timestamp of these current uncertain and strange times.  However, there is solace in an album with this level of transparency and authenticity -- a trust that as a united front, all bullshit aside, there is a genuine connection present within the shared experience of suffering and that connection might just be enough to pull us all through.

Stay tuned to spartanrecords.com for updates on Assertion and the band's debut record Intermission out April 9th. 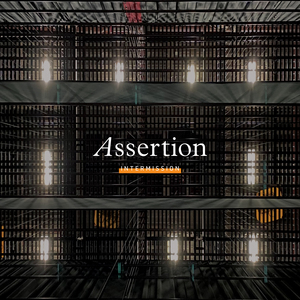